When I was 15 I got a 1980 Puch Newport Moped. Before that I had other mopeds but none were street legal. My buddy Adam had a Tomos Targa Lx. Here are some pics. Not ours, but representation of the models. 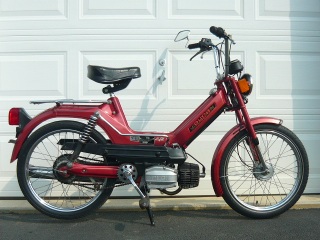 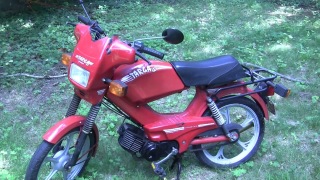 Shortly thereafter we both punched them out to 70cc and tuned them the best we could at the time. I even adapted my modded puch engine to a general 5 star frame. All we needed was a dial up modem and 50cc.nl supplied most of the parts for us. By the time we worked up the balls to ride all the way from west freehold to Six Flags our mopeds easily did 55-60 mph. Mopeds in NJ have to have pedals. If you don’t have a regular drivers license you need a moped license. They cant exceed 49cc and 25mph. You can only operate a moped on a two lane road, no highways.

We would occasionally cross 33 to get to the mall but that was the extent of it. This is an example of the route we took. Its 90% accurate but back then most of the area near 33 were fields and not houses.

We did this every day. Rain, Sleet, or Snow. We never got hit, crashed, or arrested. (Well Adam almost did but that’s a different story.) Registering a moped was a pain in the ass. There were so many rules, and the DMV didn’t have a clue half the time and neither did the cops.
AND THIS IS WHERE WE GET TO THE RUCKUS.

As far as I can tell, the Ruckus is a scooter with a moped engine. However it is registered as a motorcycle. Therefore it has no governing limitations on where and how it is operated.
So this happend: Kid DIES on I287 on a motor scooter
It really pisses me off that NJ government has their heads so far up their asses that they don’t understand how to fix this. Amend the Moped law to include scooters under 80cc and increase the speed limit to 35-40. Still no highways. Lets be honest, no one does 25 anymore and its way safer to stay inline with traffic than ride on the side and have crazy motherfuckers fly past you. We felt much safer doing 40-50 mph than 25 with cars flying past us. It’s literally THAT simple.